To an over-confident Allied High Command it seemed like Germany was on the ropes in late 1944. Yet, achieving complete surprise on December 16th Germany launched an offensive of over 400,000 German soldiers against US lines in Belgium and Luxembourg.

The goal was to split Allied forces in half and force some kind of negotiated peace settlement. The Wermacht was able to create a huge “Bulge” in US lines but never a break. At least thirteen Wilmington residents lost their lives at The Bulge.

Battle of the Bulge:

Max Schwitzgold. 33. 828 W. 2nd St. Operated candy store at 9th and Adams.  Corporal Tech, Field Artillery Observation Battalion, US Army.  Killed by German SS at the Massacre of Malmedy on the First day of the Battle of the Bulge, December 17th 1944.

Fred J. Harper. 26. 100 W. 23rd St. Sergeant, US Army. KIA in Belgium December 27th 1944 while serving with artillery battalion.  Graduate of PS Dupont High School and the U of D. Served as teacher in Seaford immediately before the war.

The Final Push into Germany:

While servicemen and their families hoped for a sudden collapse of the Third Reich in late 1944 and early 1945 this was not to happen.  German units fought until the bitter end.

William H. Peel. 937 Kirkwood. KIA on March 16th 1945 while serving as a rifleman in an infantry unit east of the Rhine River. 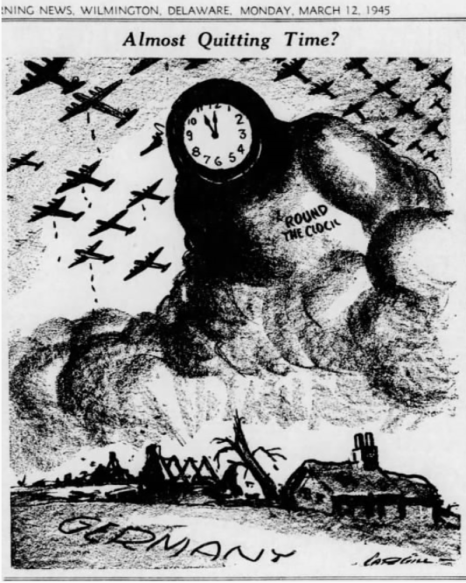 View all posts by Nathan